2019 was an interesting year in the blockchain world. Blockchain finally took the spotlight from cryptocurrencies, and it was recognized as a real and pragmatic solution to the problems faced by numerous industries. Even the executives that tread carefully when it comes to the new technology seem to recognize the potential of Blockchain’s use cases. For many, the question is no longer should they use blockchain, but how can be blockchain incorporated in their legacy systems.

The statistics are also confirming this shift, as we see the tech taking the lead:

But despite blockchain proving to be applicable across numerous use cases in different industries and key players becoming more aware of the benefits it brings to the table, we still have a rocky road ahead. 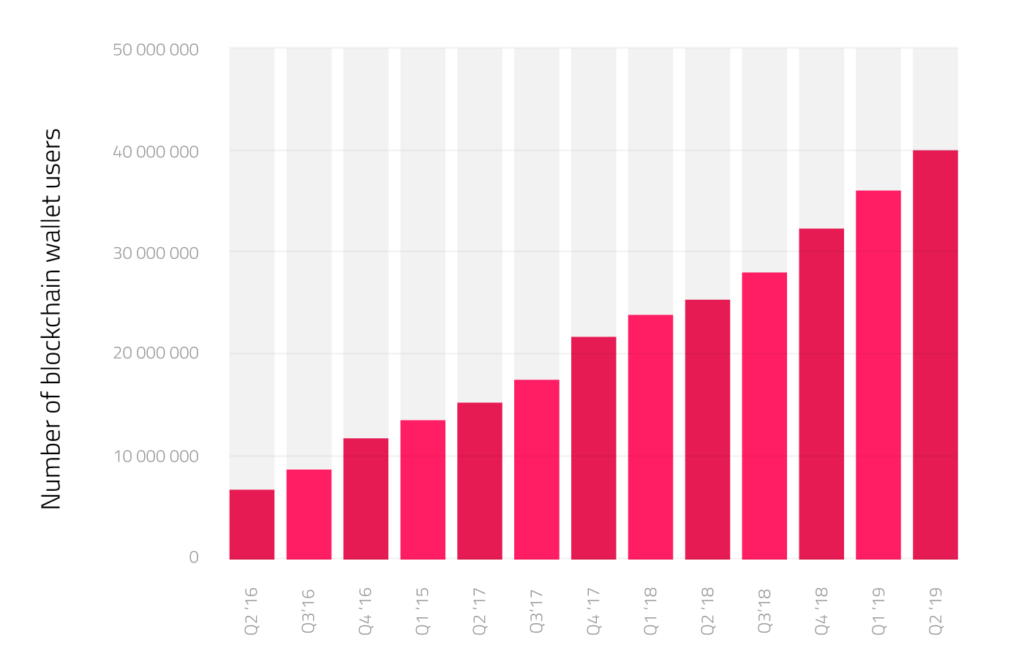 In fact, Gartner sees the upcoming year as an “evolutionary phase” for blockchain, during which the technology is expected to overcome some major issues related to enterprise deployment including poor scalability, interoperability, and so on. This means that we can expect to see certain changes and advancements in technology, but obviously through a lot of trial and error.

But before we jump to what lies ahead, let’s take a moment to review the events that took place in 2019 and share some of our favorite crypto projects.

Table of Contents hide
1. A Quick Recap of 2019
1.1. Our List of Attention-Worthy Blockchain Projects Started in 2019
2. Blockchain In Review – Issues Solved So Far
3. Challenges Ahead
4. What Can We Expect from Blockchain Industry in 2020?
4.1. 1. More Central Bank Digital Currencies To Come
4.2. 2. Blockchain Will Get Its Share Of the Gaming Industry
4.3. 3. Stablecoins Will Become More Popular
4.4. 4. Blockchain as a Service (BaaS) Will Be Big
4.5. 5. First Steps In Interoperability Between Blockchain Networks
5. Conclusion

2019 was a big year for all of us in the industry as we saw progress in adoption on all levels – from the big business over government and supply chain to finance. Another key thing we made progress in is the regulation of the blockchain industry. Besides the well-known blockchain-friendly countries, a special effort was made by the EU, UK, Japan, India, and South Korea bringing us one step closer to having a completely regulated industry.

Here are just some of the developments that we’ve witnessed over the course of this year:

Similar to previous years, in 2019 we had a large number of new players in the industry. New Blockchain products and companies were popping up on a daily basis, and as always, some were more realistic than the others. We’ve created a list of new projects we like and believe they could make a difference.

1. Polkadot Network — Led by the non-profit Web3 Foundation, Polkadot Network aims to enable true interoperability between any types of blockchains. The Polkadot project aims to provide a great foundation for a new peer-to-peer internet while solving problems such as blockchain scalability, developability, and future security.

2. Substrate — Substrate was used as the basis for Polkadot Network, and presents a framework that makes building own custom blockchain fast and easy. Substrate offers a number of cool features, including upgradable blockchains, customizable block execution logic, modular architecture, as well as hot-swappable consensus.

3. The Graph — The crew gathered around this protocol aims to truly decentralize data storing, and reduce the use of the data silos and monopolies that come with them. The Graph allows building decentralized applications quickly on Ethereum and IPFS, by using GraphQL.

4. StarkDEX – A brainchild of 0x and StarkWare, StarkDEX is a scalability engine for non-custodial exchanges. It allows the majority of the exchange’s workload to be done off-chain and enables an easily verifiable proof of the integrity of the work performed.

5. Gas Station Network — The GSN by OpenZeppelin presents a decentralized solution that is meant to help Ethereum-based applications onboard their users. It allows companies to make their Ethereum-based apps easier to use, as they no longer need to ask users to set up an account and acquire ETH to pay for their Gas.

Vitalik Buterin recently published an update about the progress we made as an industry in the last five years. And things are looking way better than they used to. Here’s an overview of the problems were we made significant progress towards the solution:

1. Scalability — One of the biggest problems in the cryptocurrency space remains scalability. The reason why scalability is on this list lies in the major progress made regarding this issue over the past five years (sharding, proofs of custody, fraud proofs, etc.), True, the progress was mostly theoretical so far, but we expect to see practical solutions in play soon enough.

2. Arbitrary Proof of Computation — Simply put, the problem was to “build a zk-SNARK.” We have made incredible progress so far, both theoretical and practical, and today we have several zero-knowledge technologies in use (SNARKS, STARKS, Bulletproofs, etc.). The zk technologies still need a few tweaks, primarily in terms of efficiency, but we’ll get there.

3. ASIC-Resistant Proof of Work – What is basically the problem here is making PoW centralization resistant. The problem came from the fact that as long as there is a financial gain tied to pure computing power, there will be people working on making more advanced mining machines. Introduction of Ethash was a step in the right direction, binding the algorithm to a limiting factor of commodity hardware (the I/O bus). Later on, Programmatic Proof-of-Work was launched, targeting a critical part of the centralization problem: specialized hardware.

Still, the problem is not completely gone, as efficiency is what everything is measured by in PoW. And there’s a source of the fallacy: full ASIC resistance is hard to achieve because PoW always requires some form of ASIC to do the work.

4. Proof of Stake — PoS was introduced as a new consensus mechanism in an attempt to solve the centralization problem of PoW. PoS has a set of its own problems, but it is a decent step towards introducing new governance models.

Although we’ve managed to solve (at least partially) some of the problems we had as an industry, we still face a number of challenges ahead. In terms of technical challenges, we still haven’t made much progress in:

But even if we manage to solve these issues, there are bigger obstacles for blockchain, and this time they are not entirely of a technical nature. In order to reach higher levels of adoption, we need to overcome several key challenges:

What Can We Expect from Blockchain Industry in 2020?

In 2017, all the buzz was about crypto taking the world by storm and completely disrupting many industries, starting with the finance industry. Then the market crashed and many thought it was the end of the crypto story for good. But, 2019 is nearly over, and we are still here. Blockchain was propelled into a new era of development and it’s growing stronger every day.

Now, with more and more businesses exploring the ways to use blockchain to their advantage, you must be wondering: where is the blockchain industry headed? And what can we expect from the next year? Here’s a list of our expectations:

For the past year or two, we have seen a rising interest in central bank digital currencies. China and Venezuela led the way, but it seems that a variety of other nations, both large and small, are considering this step too. We expect to see more central bank digital coins to be announced in 2020, supporting primarily cross-border payments. The appearance of these government-issued digital currencies is followed by many with curiosity, as these coins could shift the balance of economic power in the world.

2. Blockchain Will Get Its Share Of the Gaming Industry

Gamers have been working with non-standard digital currencies for years now, so it doesn’t actually come as a surprise that a lot of gaming companies are already working on incorporating blockchain into their future projects. Earlier this year, Sony announced that it plans to launch a blockchain-based Digital Rights Management (DRM) with the upcoming Playstation 5. Epic Games (Fortnite) and Ubisoft (Assassin’s Creed, Far Cry) are also looking into new ways to integrate blockchain into their games. This isn’t to say that we should expect smooth sailing. Blockchain still has long verification times and fiat payment providers such as PayPal are big and won’t go down easy.

According to a Blockchain report, at least 57 stablecoins have been released so far or are in the development phase. The NY State Department of Financial Services has approved the Gemini Dollar and Paxos Standard stablecoins. Projects like J.P. Morgan and Fnality will soon go live, as well, so it’s safe to say that we’ll be dealing way more with stablecoins in 2020.

Also known as coins that take all the fun out of owning cryptocurrencies, stablecoins are expected to boom in 2020 as they make retailers more comfortable with accepting crypto payments, as well as investors who don’t fully trust other volatile cryptocurrencies.

4. Blockchain as a Service (BaaS) Will Be Big

Blockchain as a Service seems to be one of the most promising trends we expect to see in 2020. China’s Shenzhen recently launched a blockchain service that allows citizens to avoid carrying paper documents as well as to apply for various government certificates/licenses using the app. Microsoft, IBM, and Amazon are all working on their respective services and we expect a lot of big names from the industry to join them in the future. BaaS presents the perfect solution for organizations that don’t understand the working mechanism behind the blockchain technology but are looking to gain the benefits of the technology. This is especially becoming popular among smaller to medium-sized enterprises due to the flexible nature of transactions, security, and cost-effective features.

Interoperability is one of the key issues holding us back from higher levels of adoption, and we expect to see major steps taken in that direction. There are some promising signs that 2020 could be the year we’ll finally see it happen. From Polkadot Network launch to Hedera Hashgraph integration with Hyperledger Fabric, in 2019 we had a wave of interoperability-related news. Considering how key this issue is for the industry, we hope that all the players in the industry will come to terms with the fact that we need to coexist if we aim to succeed.

So – it seems like 2020 has some fun things in store for us. The effects of some trends will be immediate, some may take a while, but the goals are pretty clear and we are looking forward to seeing them accomplished. One thing is certain – we are just getting started.

What are your thoughts on the future of Blockchain? Share them in the comments below.

“Live as you were to die tomorrow. Learn as if you were to live forever.”This quote from Mahatma Gandhi is one of my favorite quotes ...

You know what your MVP is but not sure which type is best for your business? In the sea of MVP types it's sometimes hard ...